In the catalogue for Sharp's Gilcrease Foundation exhibition in Tulsa in 1949, he wrote that this portrait pictured Antoine Curley, "a half breed crow (sic) who served with Custer's Command in the campaign against the Sioux in 1876." Sharp did not like Curley though he painted several iterations of his likeness. He felt Curley was reticent, rude and self-absorbed. In the catalogue for Sharp's retrospective in 1949, though, Sharp continued objectively about his sitter. "At the Battle of the Little Big Horn, Curley escaped before the fight was over and was the first to bring out news of the Indians which had overtaken the Seventh Cavalry."

Sharp had painted two nearly identical portraits of Curley, except reversed. back in 1901. He probably used the same photograph (#337a) for all three portraits. One of the earlier oils was sold to Butler and the other to Hearst. (see #s 337 and 125) 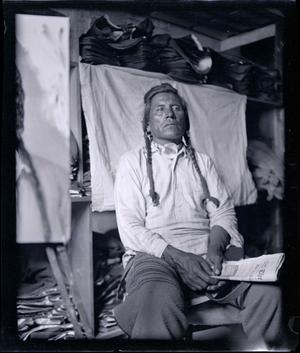 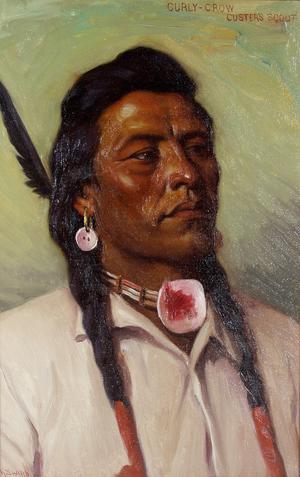