UL: J.H.SHARP. “Shelling Corn – Taos. His name is “Hunting Son.” His father was the first Indian I painted in Taos in 1893, when Son was a baby. His father (“Soaring Eagle”) was a great hunter and woodsman and the boy eager to accompany him and learn to shoot, hence his name, “Hunting Son.”  His father brought the first peyote into Taos from Oklahoma. A kind of dope like the orientals used. Chew it up for “visions” and in ceremonials. Hunting Son is the head of the Peyote Clan in Taos was also the model for the large / reproduction on my wall of “the Great Mystery,” figure standing in Aspen forest, where they go to fast and pray to get into communication with the Great Spirit. On the post is a porcupine headdress used in dances. The lover’s flute is using in courting, outside the girl’s teepee or home, to play his love songs instead of talking to her – less embarrassing, with all the family around. Painted about 1937-38. About the best Indian figure I have left. J.H. Sharp.” Taped to old cardboard backing: Best authorities, American, French, German, say not to size oil or varnish (or wax) back of canvas – makes it too brittle. Heavy paper or back board to absorb any moisture. I have found this corrugated back board the best for that and to protect the canvas from any “dinges” [sic] in handling. I have used it for 30-40 years. In a couple of years if the canvas is not tight, take the back board off & tighten the keys a little – Don’t think it will ever need it tho’. J.H. Sharp.

Despite Sharp's statement that this work was painted between 1937 and 1938, the style and costuming would suggest that it was actually produced in about 1925. A comparison with a painting of Hunting Son completed in 1935 (Record 693), reveals the openly sketchy style of his work in the mid-1930s not found in Shelling Corn.
This is probably the work titled Shelling Corn that was offered for sale in 1925 and 1927 at The Traxel Art Galleries in Cincinnati. Sharp also entered a work titled Shelling Corn - Taos in the winter, 1928 exhibition of the National Academy of Design in New York. This is perhaps that painting. 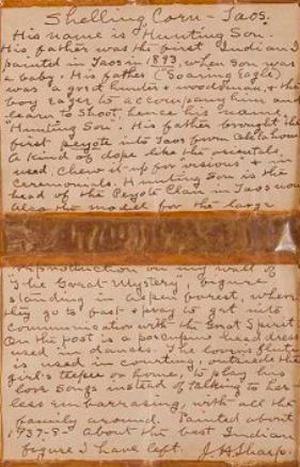 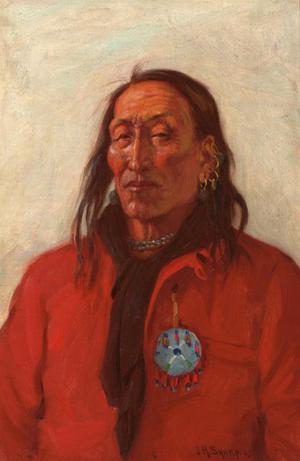 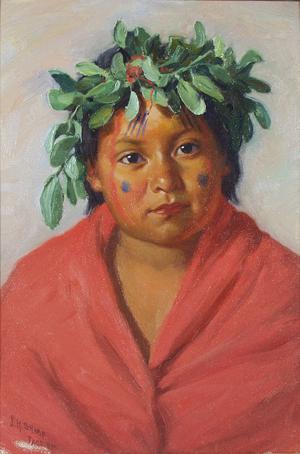