The Lament for the Dead

Death would bring relatives and mourners together, some of whom would inflict wounds on their bodies in grief. The Cheyenne used to cut off a joint of a finger. These rites, wrote Sharp, "...were practiced long before the Spanish--Mexican Penitentes. The painting occupied much of two years at Crow Agency . . . Later corrections on details and drawings were made, but I never disturbed the character of the figures or original conception." The foreground figure is the chief mourner; the others are close family members and friends. (Fenn, 2007, p. 158) 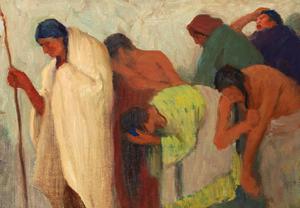