Inscribed on notepaper glued to dust cover: "Judge Short White Grass, Blackfeet 1898 - Brother of the great Chief White Calf - Proud of his place in the Police Court, and real sense of humor. One 4th of July he said to me - This is a very fine holiday, and I would like to very much if you let me have two bits to get a little fruit for my children - His children were all grown & had children of their own. I compromised on 4 bits!

There are no known exhibition records for this work until 1949 when it was part of the Gilcrease Foundation's retrospective show and listed in the catalogue as White Grass, Blackfoot. The signature type suggests that this portrait was completed around 1902 which would be reasonable since Sharp did not visit the Blackfeet until 1901. 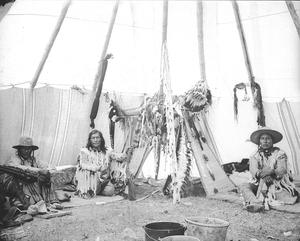