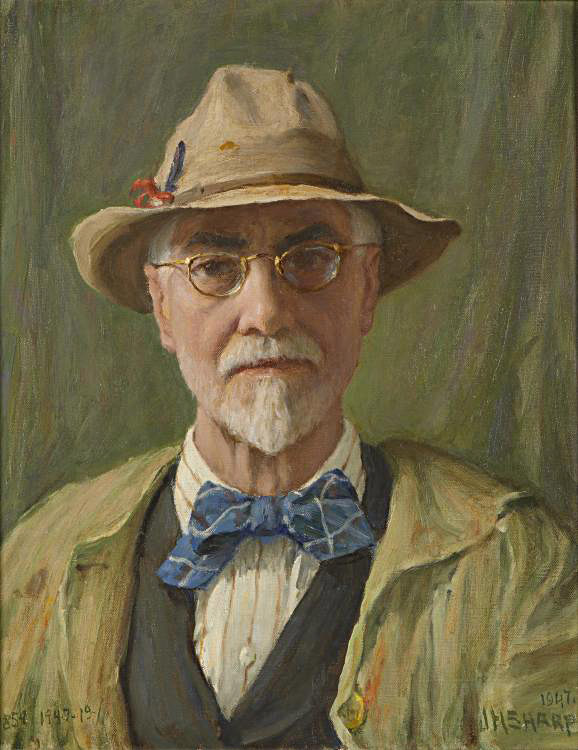 "In 1893 skipped for the West—Never regretted it!"

Joseph Henry Sharp (1859 - 1953) undertook a remarkable, life-long quest to venture west in search of unexplored places, subjects, and insights. As the thirty-five-year-old Sharp told his home town newspaper in 1894 after his first meaningful trip into the Southwest, “Any one willing to sacrifice a few modern comforts and rough it through the mountains and Indian pueblos of New Mexico can experience a novel life, fully repaying the time and trouble.” Sharp’s enduring vision was subsumed in a life in art among people whom he recognized as the “real Americans” and began in earnest when, around 1899, he came to the realization that “The Indian is becoming a factor for distinctly American pictures.” And to become a leader in that movement, he dedicated himself both to making a historical record of individuals in paint and to documenting the quotidian life of Plains and Southwestern indigenous peoples. Using first-hand experience, Sharp set himself apart from his contemporaries. As one critic noted in 1908, “Mr. Sharp has succeeded in doing what few white men have done – getting an insight into the real home life of the Indian. His Indians are not the austere, mock-heroic types that are painted by artists who work chiefly from imagination.”

Sharp stepped outside the bounds of many traditional western artists. Unlike his contemporaries Frederic Remington and Charles Russell, Sharp undertook serious art training both in Cincinnati and in European art centers like Antwerp, Munich, Paris, and Madrid. He painted scenes of women and men with equal fervor, never diminishing the former with sexist inferences as Russell was wont to do in the 1890s. Even when he settled primarily in the West after 1900, Sharp continued to exhibit his work in major exhibitions and institutions in art centers from Boston to Pittsburgh and New York to San Francisco. He played an important role in founding and sustaining the Society of Western Artists in the late 19th century and in the inception and perpetuation of the famous Taos Society of Artists. He remained steadfastly loyal to his traditional Beaux Arts style and techniques, but ventured outside those parameters frequently enough with Impressionist and Post-Impressionist works to keep from being stigmatized or limited in expression.

As Sharp embarked on his career as a full-time painter of Indians in 1901, he published a biographical sketch that addressed his achievements to date and assessed his fundamental character. It recounted that “Mr. Sharp is a typical American, full of tact and energy; ever on the alert for the new, beautiful and healthful in art: of a nervous temperament, and is a fine example of a self-made man.” As a token of an expansive oeuvre, Preparing for the Medicine Sweat, remains an uplifting example of Sharp's many explorations into cultural and natural accord, the joy of living, and the dignity of everyday existence among the Native people he was fortunate to know. At Sharp’s funeral more than fifty years later, his fellow Taos artist Ernest Blumenschein boasted of Sharp’s facility as a painter saying that through “his indefatigable labor [he] developed his technical skill to a point where he could put up his easel and paint with great speed whatever his eye could see. … He was the reporter, the recorder of absolute integrity of the American Indian. … He will go down in history with Russell and Remington.” Sharp would have been gratified with this conclusory assessment.